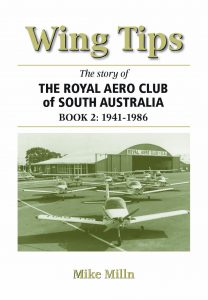 Please Note: If ordering multiple copies or you are from outside Australia, please contact sales@mikemillnbooks.com for postage cost.

This second part of Mike Milln’s history of the Royal Aero Club of South Australia covers the period immediately after World War II until its decline and eventual closure in the 1980s, and has just been published.

The Australian Aero Club movement had its roots in Australian government policy after the Great War to develop a source of pilots – initially for defence and then later for commercial aviation. Initially the clubs thrived, and between the wars they were the main source of Australian pilot
training.

Following World War II, air force requirements outgrew the technical training competence of the clubs. At the same time, governments of both major parties introduced user-pay aviation policies, wound down subsidies and exposed the clubs to commercial realities. As a result, aero clubs entered
a period of decline, and the story of the Royal Aero Club of South Australia matches the wider national experience. 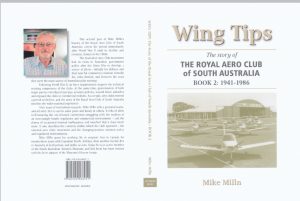 After years of meticulous research, Mike Milln tells a personal warts-and-all story that is sad in some parts and funny in others. It tells of often well-meaning but out-of-touch committees struggling with the realities of an increasingly hostile regulatory and commercial environment – and the drama of occasional internal malfeasance and mischief. But it does much more. It also describes the contexts within which the club operated – the national aero clubs’ movement and the changing postwar aviation policy and regulatory environments.

Mike Milln spent his working life in aviation: first in Canada for twenty-three years with Canadian Pacific Airlines, then another twenty-five in Australia in both private and public sectors. Today he is an active member of the South Australian Aviation Museum, and this book has been written
with the keen support of the Museum’s History Group.

Also available at Dymocks and Adelaide Booksellers in the City and at the South Australian Aviation Museum in Port Adelaide.